Pirkanmaa Senior Services Ltd. (now Sointu Senior Services) was involved in HIPPA project as the authentic test environment of Tampere University of Applied Sciences. Kuusela Centre in Härmälä, Tampere, is one of its assisted living units. It has a gym where both the residents and the clients of nearby Lähitori train, either with a trainer or independently. The user trial/testing of Medeka exercise software was based on the company’s need to receive user feedback on its product from senior users which was a new user group to the company. The company had an interest to expand its markets from athletes and recreational athletes to senior citizens.

HIPPA project responded to that need and offered Pirkanmaa Senior Services the possibility to test the product. Pirkanmaa Senior Services was thought to be a suitable test environment, in terms of its clients and residents and the Medeka product itself. The interests of different parties were thus easily compatible, and the first joint product testing in HIPPA project was carried out in Kuusela Centre in Spring 2019.

Medeka Ltd’s exercise software has different routes to choose from, either in cities or in nature, which can be viewed while using the exercise bike or the running mat, as if the user were in that environment. In the Kuusela Centre gym, the software was installed on a television and a NuStep HUR recumbent cross-trainer in front of it. The NuStep cross-trainer is ideal for the Senior Centre residents and the Lähitori clients as it can be used by a variety of different users.

The testing was carefully planned in collaboration between Tampere UAS, Pirkanmaa Senior Services Ltd. and Medeka Ltd. The objective of the testing was to collect feedback and experiences on the product’s applicability to senior citizens, whether the software motivates the users to exercise more and how the users experience the usability of the product. 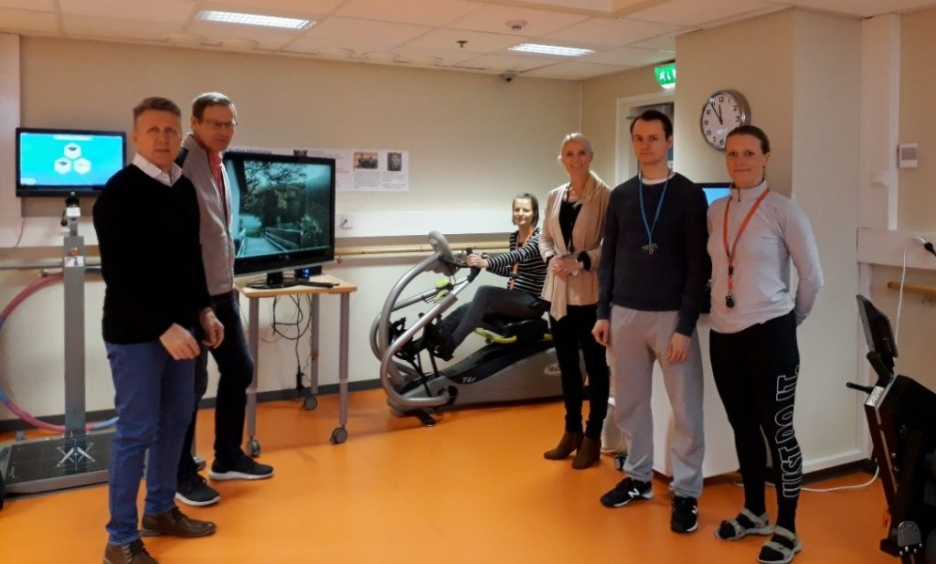 The project manager Tarja Heinonen of Tampere UAS part-project and project coordinator Suvi Hagström coordinated the co-creation and testing. Two physiotherapy students, Maija Hurskainen and Martti Rajala were engaged in the practical implementation of the testing, as part of their 5-week traineeship in “Physiotherapy for the Elderly” in Kuusela Centre. The students, as part of their practical training, also participated in the HIPPA project as testers of the exercise software. 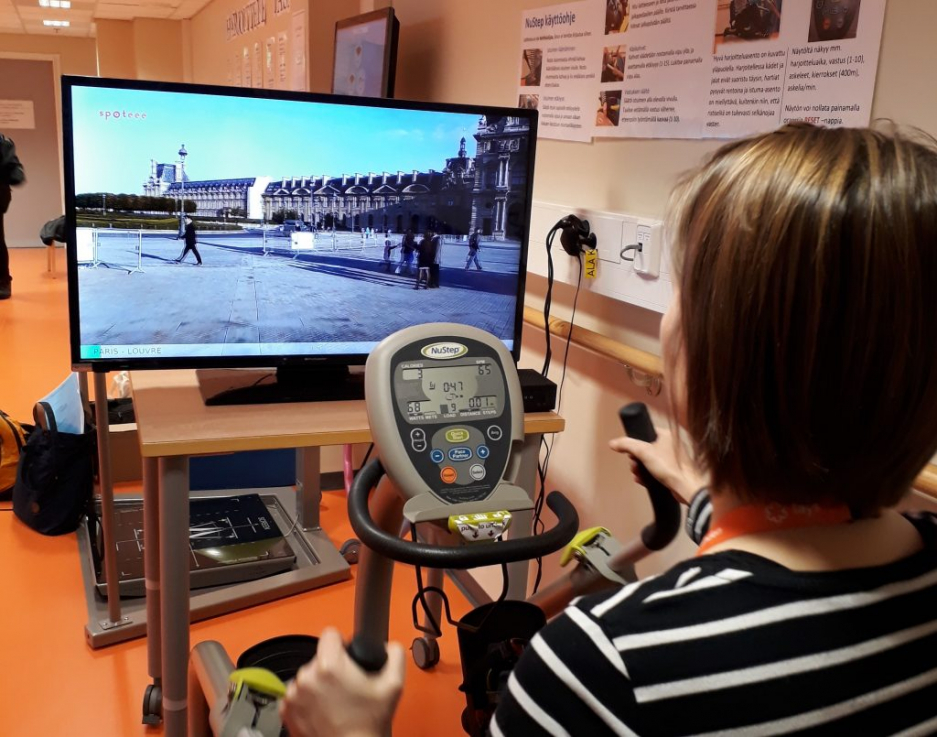 Together with Marianne Lepistö, physiotherapist of Kuusela Centre, the students could easily recruit a sufficient number of enthusiastic senior citizens to test the new machine in the gym. Altogether 20 senior citizens participated in the testing, aged 64-90 years and mainly Lähitori clients. As for their exercise habits, some of them were very active, but as a whole the testing group was an illustrative sample of a heterogeneous senior citizens group. Recruiting the participants is an important part of the testing process and it went very well. Also “marketing” has an effect on the success of the recruitment. It is important that the testers feel that they are not just the objects of testing but that their experiences and feedback of the product matter most. 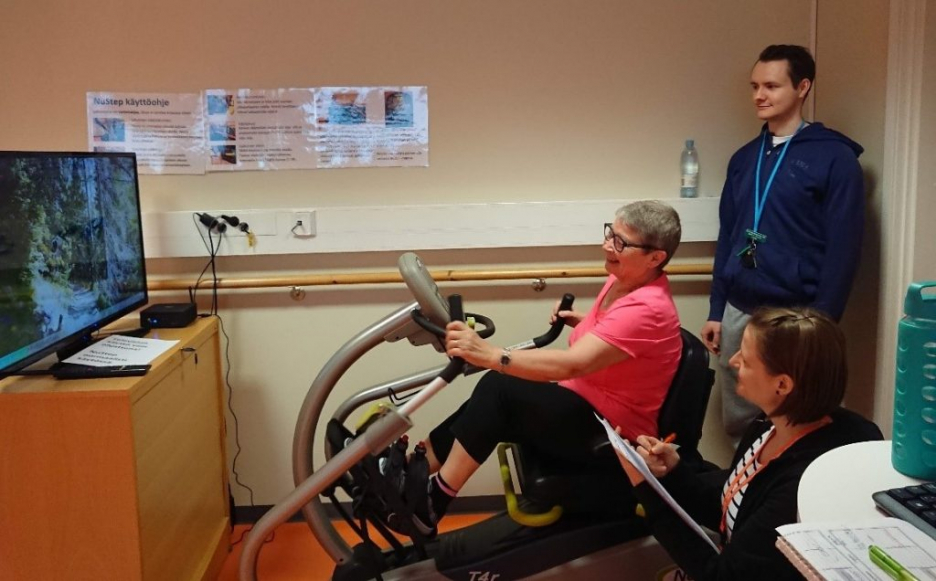 In the beginning, the software was only used with an instructor but during the third week the seniors could test the NuStep cross-trainer on their own. The students put the instructions for use to the gym wall, after which an enthusiastic senior citizen immediately started to use NuStep independently. Together with another user, they launched the chosen scenic route and started to warm-up before their actual training at the gym.

Feedback and user experiences from the participants were collected with the help of a modified SUS survey. The survey was modified to fit specifically this testing. The survey was carried out by interviewing the participants individually. During the testing, the testers also observed and chatted with the participants. By doing this, valuable spontaneous feedback could be collected. After the testing, the company received the survey results and a written report. At approximately halfway of the testing period, a mid-term assessment was organized in Kuusela Centre. This meeting is also an important part of the testing process. During the meeting, matters that are brought up in the beginning of the testing or user trial can be dealt with, and additional measures may be taken for the remaining testing period, if necessary. All testing parties are invited to this meeting.

The seniors’ experiences are the most important

During the testing, valuable feedback of the exercise software could be collected from the senior citizens testing it. It seems that the users prefer the scenic routes in nature. Scenic views arouse memories of the participants’ own trips and thoughts about the possible animals and plants in the green landscapes.

”This is much nicer than staring at a white wall.”

Somebody remembered a previous trip while exercising on the Paris route:

”By the way, there are stairs in Arc de Triomphe, and I visited an art exhibition there."

Those who chose city routes often made their selection on the basis of their own previous visits in the city. One of the testers chose a particular route because her friend lived in that city. One tester chose a particular city for its interesting history. The users said that routes and beautiful landscapes aroused curiosity and interest. This adds colour to the training, the participants thought. They also thought that time flies when using the software – 10 minutes went by quickly.

All testers would recommend the software to other seniors. Their views were based on the following: possibility to experience new things and have some variety while exercising, possibility to think about something else, exercising like this boosts mood and encourages to exercise more, and adds content to one’s exercise routines. Also, the testers added that you can always look at the beautiful landscapes without even actually exercising.

”A good way to see the world – other places than the familiar surroundings!” 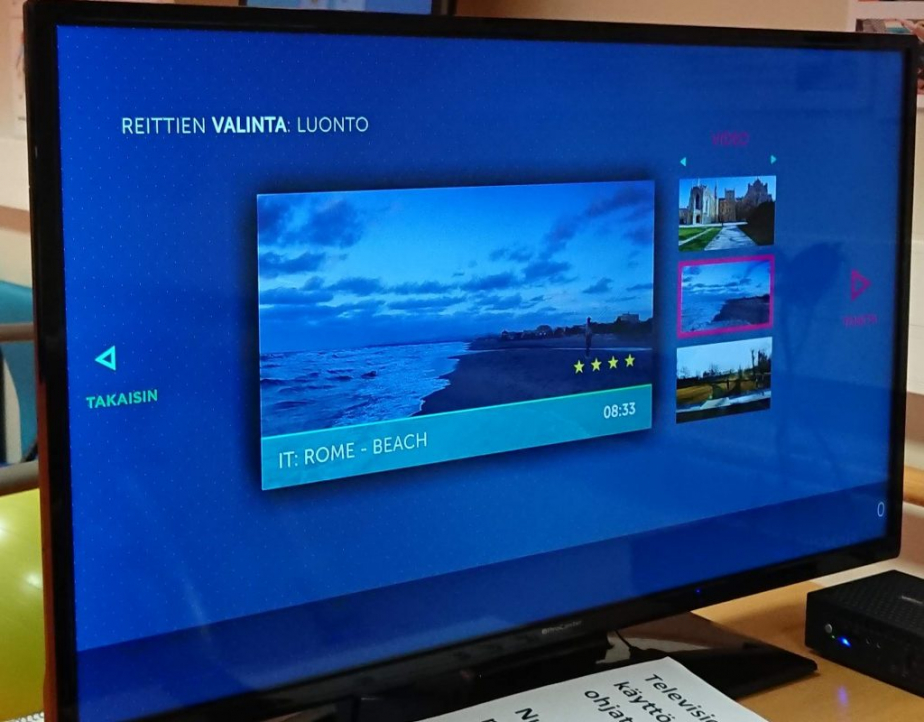 What were the co-creation outcomes to different parties?

Towards the end of the testing, a joint feedback session was organized in Kuusela, to gather experiences from different parties. From the company’s perspective, the implementation resulted in receiving valuable feedback from genuine users.

”It was simply great”, Kalle Punto and Kimmo Ahokanto from Medeka Ltd. concluded. ”We gave the implementors free hands to do as they wished and it was worth it – all our expectations were met. Our cooperation with Tampere UAS was very smooth and they really listened to us. The project contact persons were easy-going and we felt good in meetings. We’re more than happy that we did this!”

Positive feedback was also received of the testing enabled by the HIPPA project: it was implemented in an effective and well-planned manner. The received feedback confirmed the company’s initial thoughts that the software was well suited for senior citizens. The main participants of the testing, i.e. the seniors, were also asked during the testing about their development ideas to the software. In that way, they were involved as sort of product developers as well. Most testers had a very strong interest and an open mind towards the software and its testing.

Also the team leaders of Pirkanmaa Senior Services Ltd. listened enthusiastically the summary of experiences. After the testing, Pirkanmaa Senior Services Ltd. actually continued the use of the solution in their senior homes and they also bought the solution for the use of the residents in their assisted living facilities. The effortless transferability of Medeka Ltd’s exercise software between the different facilities was regarded as a welcomed feature.

The students, the future professionals in rehabilitation, thought that participating in the project and the testing was an eye-opening learning experience – the experience expanded their views on implementing a project and other practical matters. “It was nice to participate in the implementation where the idea was to look for motivational factors for senior citizens’ exercise, which we think is very important”, Maija Hurskainen and Martti Rajala said. Also encountering senior citizens was a positive experience to the students. ”It was very fruitful to communicate with the seniors in a more profound way. Maybe they opened up a bit more in the testing situation as they would otherwise have done. The testing itself went well, maybe even better than expected: people really wanted to be part of it.”